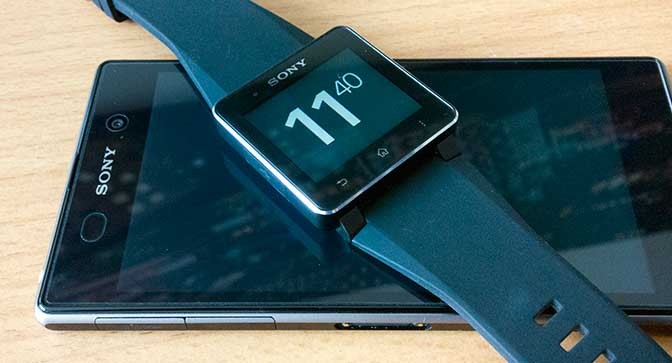 In our previous smart watch review, we took a look at the Samsung Gear 2, trying to work out just how much of a novelty the device was. It had a price tag that easily hit above its weight, with some reaching as far as £279.99. Today, we’re going to look at a cheaper, much more logical progression into the smart watch genre, but we are faced with a different dilemma; is this not worth even £100? It’s time to look at the Sony SmartWatch 2.

Let’s start where we kicked off before; the box is distinctly different to that of the Gear 2, and despite being a lot cheaper than our previous piece of tech, it manages to create a much more elaborate box. Although I’m going to presume that it comes in different colours, the box I had was covered in black card, with a slot open at the front for viewing the device. This first design choice is quite admirable – although it does the opposite of the Gear 2’s emphasis on opening the device, it focuses more on giving the customer exactly what they want; they can see the device, including exact size, materials, colour schemes and the sort. The box itself has a lot of information along both horizontal sides, giving indicators of applications usable on the device, specifically Facebook.

Unfortunately, the design of the box when looking at it compared to the completely unnecessary packaging can often ruin the first impressions for some. Due to the hanging flap sticking out of the top of the box, it’s very difficult to remove the card sleeve, plastic cover and card insides without tearing something. You’ll find the watch wrapped around another chunk inside the box itself, another unnecessary piece to this overcomplicated puzzle. The charger is found behind the card sleeve that is holding the watch up. Something that we’ll be returning to later is the theme of ‘hassle’. Overall, the opening experience is 50/50; you’re going to enjoy looking at it, but you’re going to loathe opening it.

Let’s get onto the watch itself. The watch is relatively uninspired in design, but it definitely works to the advantage of the device; a square slab with a slightly rectangular display (1.6-inch, 220×176 to be precise) manage to fulfil a basic purpose of acting as a smart watch. Admittedly, it’s not as sleek, or stylish as the other watch we have looked at so far, making it often seem quite bland, yet the main debating point about the overall design is the strap. Made of rubber and having no unique features, the strap is directly connected to the device, but can be switched out. The default one that I have right now is the rubber one, which honestly makes the watch seem quite tacky and cheap, but with a reduced price, it’s understandable as to why these changes would be made. One thing that immediately stands out, and is probably one of the coolest features the device initially has to offer to new users is the transflective screen; by using the light that hits the screen to reflect back an image, the watch will always tell the time, regardless of the lighting you’re in. Sun glare doesn’t seem to effect the display. It also seems to have very little impact on the battery usage, which is always a bonus. As such, the device doesn’t need to have the nifty motion control features that the Samsung Gear 2 had. Unfortunately, past this, the operating system remains undeniably bland. Backgrounds are dull, making wallpapers uninteresting to look at; it doesn’t help either that the device is hard to actually get on, with the power button requiring at least two tries to work properly unless you press it in exactly the right way. Frustration to turn on a device is always a bad sign. Icons are noticeably pixelated, further highlighting the mediocre quality of the screen.

Before you can really do anything with the device, you have to sync it up to a device. Luckily, the Smart Watch 2 can sync up to any device with any android phone that is running version 4.0 or higher, meaning that there is a wide variety of devices that can be used. As mentioned before, I was using a Sony Xperia, which has NFC technology. Theoretically speaking, this means that all I have to do is slide to pieces of tech with the NFC in to sync them up together. In reality, the technology was slow, and clunky, taking multiple tries. It also caused the phone to have a few problems attaining the relevant information; in the end I had to manually search for the application that managed other applications for the device. Luckily, the Play store manages to be quite sleek and quick to work, so I had no problem installing a few games, applications and utilities to the device. It doesn’t offer as much customisation as the Gear 2, but a common trend with both devices is the limited amount of applications actually available for download. Customisation does seem to be a common trend of concern with these devices; despite changing wallpapers, and some personal applications that provide notifications from Facebook, Twitter and other social networks, the smart watches have very little personalisation. A chief reason for the extended popularity of the smartphone devices is mostly down to how customisable the devices are, giving complete control to the owners themselves. Unfortunately, the current generation of smart watch devices doesn’t offer this.

Application management itself once again runs through the phone as opposed to the watch itself. They all struggle in the controls department, mainly due to the size of the screen, and playing a game for too long can become uncomfortable for either your arm holding the watch up, or your neck looking down for extended periods of time. I was only able to find serviceable versions of Snake and 2048, both of which were hardly enjoyable considering the tiny screen. It’s very difficult to play when your finger is covering a portion of the game screen, and I noticed that the touch controls are even less receptive on the Smart Watch 2 – Snake is almost unplayable, with one second delays between finger swipes. A lot of the other customisation features, such as the look of the clock, are all done through the phone, but with this much time being spent on the phone, questions must be asked posing the issue of why you’d want the watch in the first place, if so much time is dedicated to setting it up and maintaining it on another device which has a much nicer screen, better controls, more customisation and impressive variety in applications. The watch feels more like a hindrance to my activities, and an expensive one at that.

To add to this, the screen struggles to cope with the strain of any games or applications beyond extremely basic design. Being only a 1.6-inch, 220 x176 TFT LCD display, it has very little to compare to the bright, vibrant and visually stunning aesthetics of the Samsung Gear 2, making it quite hard to read at times. I found the text on the screen to often be too small, and the rectangular screen surprisingly makes the screen itself seem squished, with less room for what it actually wishes to achieve. When comparing this to the Gear 2’s 320 x 320 square screen, we have a clearly sleeker design. As mentioned before, icons are noticeably pixelated, and brightness settings are less vibrant and clear than the Gear 2 as well, but in a sense, this adds to the novelty of the device.

The Sony Smart Watch 2 is a hassle outside of the house, but when inside, it acts as a very mediocre social networking device, telling you when tweets or notifications come through. Unfortunately, when tied to an email address that receives emails frequently, the watch never ceases to vibrate, eventually becoming uncomfortable to wear.
A word we keep returning to is the word “hassle”, and I think that the Sony Smart Watch 2 embodies the word almost whole heartedly. From the opening process, which makes you worried you’re going to break something, to the syncing process, which is painfully slow and clunky, to the actual use of applications, which is often poorly received, the watch seems determined to match itself to its low asking price of around £100. Although it boasts some cool features (it’s water and dust resistant too!) it doesn’t manage to make itself stand out as a cheap way into the “amazing smart watch” market. If anything, it acts as a way to devalue the idea of the device existing; struggling to find its footing in an immature market whilst not actually being able to identify itself as a device in its own right. To put it simply, although some of the features were kind of cool, or nice, none of them blew me away, or made me fall in love with device. In fact, it was quite the contrary; when the device was vibrating every couple of seconds, I couldn’t wait to get it off.

Honestly, if you’re desperate, and I mean truly desperate for a smart watch, then I could heartily recommend the Sony SmartWatch 2 to you; it fulfils the basic requirements needed of the device without being too overwhelming, but at the same time, it suffers from a few underwhelming features. Considering the battery life, the price and the possibilities available, I can confirm that it is a device worth having if the need is there. But as a passing fancy, I’d suggest you invest in something a little more long-lasting and versatile than the Sony SmartWatch 2; it simply doesn’t meet the requirements of a device that will sell the smart watch industry to you

0 thoughts on “Sony Smartwatch 2 – Did it miss the mark?”

This site uses Akismet to reduce spam. Learn how your comment data is processed.

We receive no financial gain from the manufacturers of the products we review on this site. In the vast majority of cases, products are sent back following our review period. In rare cases, companies allow us to keep the products reviewed. These are normally either made use of at home or given to family members. We haven't as yet been allowed to keep any electric super-cars, but we continue to live in hope.

In order to make this site financially viable, we display affiliate adverts. Should you decide to click on these adverts and then consequently purchase the product, this may result in us earning a very small amount in commission.

Thanks for your understanding

On the Sofa at the BBC

Technology and Gadget Reviews on air, online, in print and in person

Oldify is an amazing set of tools for accurately colourising and cleaning up old photos or movies.